A visit to the Barney Ford House Museum checks off two items on the Breckenridge Bucket List:

tour an authentic Victorian-era home, and learn about a brilliant pioneer and civil rights leader. Barney Ford is one of Breckenridge’s most famous citizens. And yet few people have ever heard of him. He built a magnificent home in Breckenridge in 1882, worthy of a museum unto itself. But it is the story of Barney Ford the man that captures the heart and imagination.

In 1880, Breckenridge was booming again. Hard rock mining was taking off as new technologies made it easier to extract the gold from the rock. And the railroad was coming to town, with track construction well on the way from Denver. Barney Ford made a comeback in Breckenridge then, too.

Ford had tried his hand at mining in the Breckenridge area at the beginnings of the Gold Rush, but as men of color were not allowed to own property, he was run out of town. This time, nearly twenty years later, Ford was back, to mine the miners with his distinctive brand of hospitality and service.

Ford built a restaurant at the corner of Main Street and Washington Avenue and lived in the back while his dream home was being constructed. Designed by famous Breckenridge architect Elias Nashold, the luxurious home included the Nashold-signature bay window, and was decorated with gold flecked wallpaper (a sample is on display in the museum). It also boasts the earliest electric lights in town. The house was considered huge, a mansion compared to the shotgun shacks and gussied up log cabins that dominated the townscape of Breckenridge at the time.

Barney Ford's home was built without a kitchen. And why would you if your restaurant was only steps away? Meals came into the house via a side door facing Main Street.

With sumptuous furnishings and period décor, the Barney Ford House Museum tells the story of an upscale, but still typical Victorian-era home in Breckenridge of the late 19th century. That alone is enough to capture the interest of lovers of architecture and mining town history.

But step inside and learn more about Barney Ford’s incredible life, and you will be captivated by his indomitable spirit.

“I like to talk about Barney Ford’s tenacity,” shared museum docent June Walters. “He overcame so many obstacles in his life.” Born in 1822 in Virginia to a house slave mother and plantation owner father, Barney was up against the odds from the start. “Yet every bit of knowledge and tradesmanship he learned as a slave, served his success later in life when he finally found freedom,” according to Walters.

It wasn’t until he was 26 years old that Barney Ford escaped enslavement by fleeing a riverboat to the “free side” of the Mississippi River in Quincy, Illinois. He quickly made his way to Chicago, where he met and fell in love with Julia Lioni, the sister-in-law of the great abolitionist Henry Wagoner, an early activist with the Underground Railroad and a friend of Frederick Douglass. 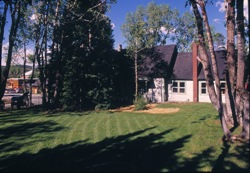 sculpture of stages of Ford's life; Ford's office in the museum; the yard of Ford's home

Along the way to freedom, Barney’s many work experiences included droving pigs and cattle, working in the Georgia gold fields with the Cherokee Indians, learning food preparation and fine service, and training as a barber. His mother insisted that he learn to read and stole a dictionary from the master’s house to aid Barney’s education. All of these skills would serve Barney throughout his life.

One of the most valuable lessons he learned was that the better the service, the better the tips. And with that attitude, he built a hospitality empire that stretched from Denver to Cheyenne, Wyoming. To celebrate the opening of his Inter-Ocean Hotel in Cheyenne in 1875, Ford’s menu included blue-winged duck with Richelieu ragout, larded tendons of veal a la Jackmiere, and whipped syllabub for dessert. Ford would often serve the meals himself.

By 1880, Barney Ford was the 14th wealthiest man in Colorado. But he never forgot his roots and the people who helped him along the way. When the citizens of the Colorado territory first applied for statehood in 1868, Ford petitioned against it, even traveling to Washington, D.C., to convince legislators to not accept Colorado’s application. The reason? The proposed state’s constitution denied voting rights to people of color. When Colorado became a state in 1876, Barney Ford’s success was notable, as suffrage for black American males was recognized in the new state constitution.

“Barney Ford was well beyond his time,” according to museum docent Sharon Trumbore. “He had to be a genius, he was so good at so many things. He was in to mathematics, he recited poetry, he was a good businessman, father and husband.”

“Barney Ford was very inclusive in his considerations,” said June Walters, speaking in this video from KDVR News. “His progressivism in politics, I think, put Colorado in the more progressive position that it is today.”

On a visit to the Barney Ford Museum, you may enjoy a self-guided tour reading information placards placed tastefully throughout the exhibits. Or engage with a knowledgeable docent. The museum is free and donations are appreciated.

Barney Ford was posthumously honored by the Colorado Tourism Hall of Fame in 2018 for promoting the state through fine service and hospitality. The Breckenridge Heritage Alliance will celebrate Barney Ford’s 200th Birthday in 2022. Plans are currently underway to honor this outstanding citizen of Breckenridge and Colorado.

Visit the Barney Ford House Museum at 111 East Washington Avenue in Breckenridge. It is open year-round with seasonal schedules. For more information about other local museums and historic tours and activities, visit the Breckenridge Heritage Alliance website.

In the Footsteps of History, Breckenridge CO

A Timeless Museum in Breckenridge, CO